A January 2019 McKinsey article, Blockchain’s Occam problem, noted that blockchain has the potential to be a game changer, but has yet to be proved. The report indicates that markets from financial services to healthcare and the arts have identified more than 100 blockchain use cases with the most impressive results are where blockchains are used to store information, cut out intermediaries, and enable greater coordination between companies. But the report noted that overall, blockchain is an ‘infant technology that’s relatively unstable’.

Venture capital funding for blockchain startups continues to grow and was around $3.9 billion in the first three quarters of 2018. IBM has invested more than $200 million in a blockchain-powered data-sharing solution for the Internet of Things (IoT), and Google has been working with blockchain since 2016 when it offered a trial to developers to test blockchain services in its cloud. The financial industry alone spends around $1.7 billion on blockchain.

Eitan Jankelewitz, Partner, Sheridans, says he expects traditional VC funding will continue to be available for the best projects.

“In 2018, the Initial Coin Offering (ICO) market in the EU was not at all as strong as 2017, and I expect this trend to persist in 2019,” said Jankelewitz. “From a regulatory perspective, we are in a clearer position in 2019 because of the December 2018 publication of the UK Financial Conduct Authority’s Cryptoassets Taskforce: final report, as well as the publication of the report with advice for the European Commission by the European Banking Authority.”

“Both are significant. Aside from being the clearest regulatory statements on the use of crypto assets in the EU, they both make a distinction between payment tokens, security tokens and utility tokens,” added Jankelewitz. “This should help start-ups looking to fundraise by ICO find a compliant way through the process. It also makes clear that, unlike lots of other jurisdictions, the EU does not see ICOs as necessarily problematic.”

So what’s going to matter in 2019? Shone Antsy is the executive chairman and co-founder of the Blockchain Intelligence Group and Ed Handschuh, Co-founder and CEO, 1Konto break down some blockchain trends for 2019.

Antsy says that the new generation of wallets is the shop window for cryptocurrencies.

“They determine people’s verdict on cryptocurrencies’ security and usability. To get a crypto wallet to offer the level of protection and usability that people are accustomed to getting from fiat currency, sound management of private keys, a trustless default-free transaction process, and a user-friendly interface are key requirements,” said Antsy. “Desktop wallets such as Jaxx, Atomic and Exodus appear to have a good combination of security and usability. The development of atomic swaps can bring the secure transaction environment of a decentralized exchange to the type of wallets that are straight-forward for people to use.”

But Handschuhs says he believes crypto is already more secure in many instances than traditional fiat currencies.

“The issue with crypto security lies not in the currency, but the provider holding your crypto and their vulnerability to being hacked,” said Handschuhs. “Users have the option to hold their own currency, but this reduces its usability and increases friction in the system which also reduces adoption. Due to these limitations, many choose a wallet provider.”

“In some ways, this security has actually reduced its usability and caused the need for third-party applications to make using cryptocurrency easier and more approachable,” added Handschuhs. “The key to usability is added access/venues to purchase items with the currency.  Companies like BitPay are making great strides in this area and allows crypto purchases to be similar to a PayPal purchase, very intuitive and user-friendly.”

Antsy says that for 2019, the laws and regulations we can expect are most likely to be further developments on reforms made in 2018.

“For the US, federal and state level laws will evolve to accommodate cryptocurrencies among their existing rulings about virtual currency in general. However, some states define cryptocurrency as money to make them comply with their money transmission laws,” said Antsy. “Meanwhile, at the federal level, the SEC continues to push for cryptocurrencies to be defined as securities so that they can treat ICOs and now Security Token Offerings using the same channels they apply for their regulation of financial markets as a whole.”

“New York State Department of Financial Services went so far as to require cryptocurrency traders to purchase a license called the BitLicense to operate an exchange or wallet service,” said Antsy.  “We are not sure how much traction licensing will have in 2019 as take-up has been low and some exchanges and wallet services have preferred to exclude US customers to avoid getting embroiled in the US’s regulations.”

Jankelewitz says that when it comes to investment and if there’s an appetite in the market is a whole other question.

“Some ICO investors are coming to realise that some of their earlier decisions may have been clouded by a rush of blood to the head. This applies to individuals as well as institutions such as ICO-focussed VCs, whose investments are mostly way down over 2018.,” said Jankelewitz.  “Similarly, start-ups whose target customers are larger corporates have told me that in some cases, having completed an ICO can close more doors that it opens. This is partly to do with previous regulatory uncertainty, but more to do with the effect of feeding reputational risk into a large corporates cost-benefit analysis.”

“I expect that a combination of savvier investors and clearer regulation will see more judicious use of ICO’s for fundraising over 2019. I don’t think that the days of the ICO fundraise in the EU are over – an ICO fundraise can be an excellent way to raise money, but ICOs are really only an option for a handful of companies, and only ever when done properly,” said Jankelewitz.

“ICOs are complex corporate transactions and should be approached, by issuers and investors, as such. The clearer regulation in the EU should make this more achievable in 2019,” adds Jankelewitz.

Antsy says incongruity between national and local (in the US) threatens to fuel continued inconsistency about how to define cryptocurrency into 2019.

“However, this can also create the impetus for regional regulation along similar lines to the Asian countries who have designed their regulations to balance protections for consumers with a light hand that allows innovation to flourish,” added Antsy.

Handschuh says the industry would like to see the regulatory environment surrounding cryptocurrency and capital raising to become more evident and ideally have congress create guidelines for the industry to follow.

“My faith is that Congress will pull together and provide clarity to this new industry,” said Handschuh. “I am more hopeful that the SEC will have clear, written guidelines for Initial Coin Offerings (ICO), Security Token Offerings (STO) and cryptocurrencies by the end of 2019 and regulatory clarity can only help the space grow, but I don’t believe it is required as I see adoption occurring regardless.”

Both Antsy and Handschuh don’t believe the success or failure of blockchain depends on regulation.

“The success or failure lies in the responsiveness of the blockchain community to act in the interests of its users,” said Antsy. “This can involve guiding regulators, [..] but it boils down to the user’s own experience of being served properly and feeling safe in a world that is still very new and still under attacks from hackers and scammers.”

Handschuh is more adamant. He says success depends on adoption.

“The more adoption, the more clarity we will receive in regulation, and that will spur more growth,” said Handschuh. “Blockchain technology needs to work on a user story basis, not simply because it is built upon this amazing new technology.”

“To me, success looks like this: when my grandmother can download an app on her phone and not even realize it’s on blockchain.  She downloaded it because of what it does, not how it does it or how it is regulated,” quipped Handschuh.

“One interesting outcome of the falling fiat values of cryptocurrencies through 2018 is that it has impacted much more on the large mining facilities who overreached themselves in such a way that it turned out to be costly. They purchased large facilities in remote locations that have since proven to become too expensive to service,” said Antsy.

“Conversely, the smaller mines that had either pooled their resources or retrofitted their existing plant had less of an environmental impact and are still in business,” said Antsy. “Mining operations are attracted by efficient conditions whenever they make decisions about locating their rigs: low energy costs, benign climate, stable political environment. The smaller mines have successfully assimilated with the locations they have adopted and so have had less of an impact on the natural environment.”

Antsy says calculations about how much it costs to mine 1 BTC still remain problematic.

“The variables are just too different across the mining ecosystem because of differing hardware, differing mining settings etc., and many mines do not disclose details about their energy consumption,” said Antsy. “If the Paris Agreement on Climate Change can stipulate specific hardware for cryptocurrency mining and require miners to state their expenditure, we might get firmer foundations for calculating cryptocurrency’s impact on climate change. But, until then, the question is going to continue to be mired in presumptuous estimates.”

Joseph Pallant, Founder, Blockchain for Climate Foundation attended COP 24 in Katowice, Poland in December 2018 and said that one of the big failures of an otherwise good COP24 makes blockchain more crucial than ever. 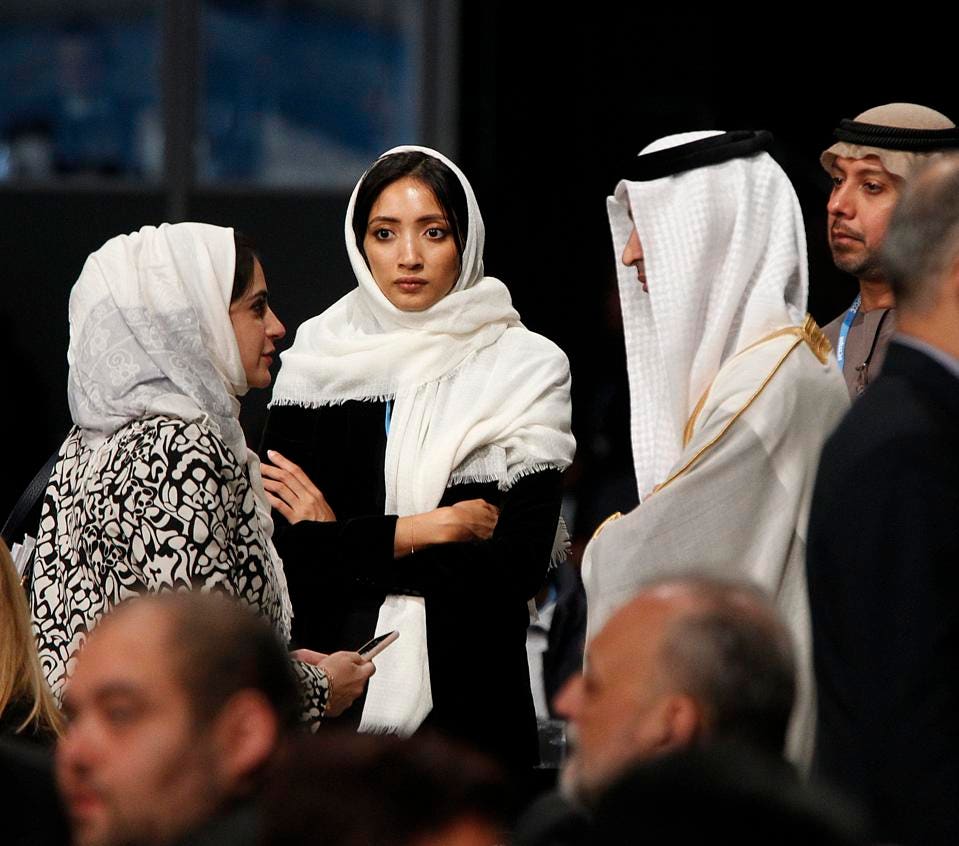 Leaders and negotiators from almost 200 nations from around the globe talk during the official opening of the key U.N. climate conference COP 24 that is to agree on ways of fighting global warming in Katowice, Poland, Monday, Dec. 3, 2018. (AP Photo/Czarek Sokolowski) Photo credit: ASSOCIATED PRESS

“Article 6 is key for the climate fight because it’s the part of the Paris Agreement that allows international collaboration on investment in emissions reductions,” said Pallant. “Without it, investor nations cannot access the carbon credit that it deserves from the impacts of its investments. And in many cases, this credit is a key aspect of the value chain and business plan.”

Pallant says without consensus on Article 6 at COP 24, the international community was unable to move forward this key collaboration mechanism.

“They had to punt it to COP25  in January 2020,” added Pallant. “As a result, a whole scope of institutional and private investment in climate action just got sidelined for another 13 months. Given indications that 2021 was the earliest start date for international carbon trades under Article 6 before this setback, this is clearly a big issue.”

Handschuh says that we need to look at what functions miners are performing for energy usages.

“They are acting as an international banking system, payments system and immutable database,” said Handschuh. “When we look at the functions and not simply the ‘cost to mine 1 BTC’, we see their data usage is less than traditional companies in those spaces. As time goes on, I expect the energy usage to decrease to more efficient processes and an increasing preference to geothermal and other renewable energy sources and the reason for that [..] it can be economically beneficial and [..]environmentally beneficial.”

“We could have a 100% green renewable financial system which employs fewer people and costs a fraction of what today’s system costs regarding energy, infrastructure and human capital,” said Handschuh.

World Blockchain Summit is geared up to gather the most influential voices in the...

Bitmain Announces Antminer s17 Date: Can It Turn the Company’s Fortunes Around?

How to make money trading cryptocurrency

by George Bukaeke
Input your search keywords and press Enter.